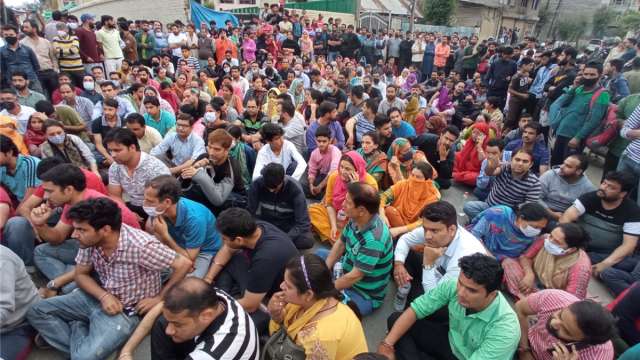 Hours after reports surfaced of a Kashmiri Pandit being killed in Jammu and Kashmir’s Budgam area, the KPs in the union territory stage massive protests late at night on Thursday, demanding the end of injustices against them in Kashmir.

Protesters in Jammu and Kashmir’s Budgam blocked the national highway during their demonstration and demanded safety for their community after the killing of 36-year-old Rahul Bhat, who was a Kashmiri Pandit, by terrorists.

Many members of the Kashmiri Pandit community left their transit camps, where they have been residing since their exodus in 1990, took to the streets, and blocked roads and highways, demanding justice for Rahul Bhat and his family.

The protestors also raised slogans against the central government, saying that it has not delivered on its promises and has failed to protect them. It was reported that slogans against Prime Minister Narendra Modi and Union Home Minister Amit Shah were heard during the protests.

Candlelight marches were also held in the union territory, and several protestors also reached the residence of Rahul Bhat to express their condolences to the family of the victim.

On Thursday, terrorists barged inside the Tehsildar’s office at Chadoora village in Budgam district and shot Rahul Bhat, who was an employee there for the past 10 years. He was given employment under a special package for the rehabilitation of Kashmiri Pandits.

The killing of Rahul Bhat marks the third killing of a Kashmiri Pandit in Jammu and Kashmir over the past six months. Meanwhile, two other people in the community have been injured in targeted attacks.

Bhat’s family also demanded a probe into his murder after mourners and the Kashmiri Pandit community flocked to their house for support. “His body should be returned immediately and an inquiry ordered into the incident to identify all those who are involved in his cold-blooded murder,” his father Bita Bhat said at his Durga Nagar residence on the outskirts of Jammu, as per PTI reports.

Wails and shrieks filled the house as mourners including neighbours and relatives rushed to comfort the family after hearing about the killing of Bhat. Many mourners and people from the KP community were standing outside Bhat’s house in support of his family.

READ | Who was Rahul Bhat, Kashmiri Pandit murdered by terrorists in Budgam?