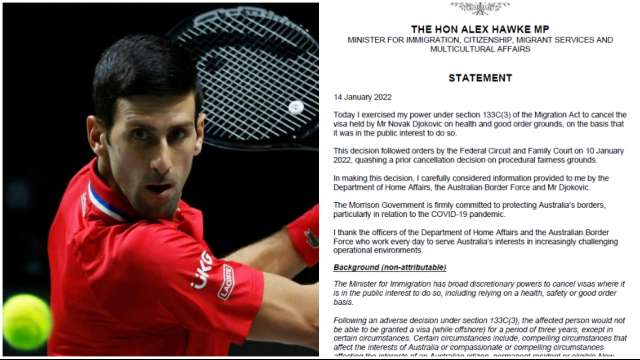 The Novak Djokovic versus Australian government saga took a turn for the worse on Friday as the latter cancelled Djokovic’s visa for the second time after immigration minister Alex Hawke used his authority to overturn an earlier decision from the Federal Court.

Djokovic, who challenged the Australian government’s decision to cancel his visa in the first attempt, was seeking exemption from a COVID-19 vaccination requirement, and the federal court had even ruled in the favour of the defending champion on January 10, however, the immigration minister Alex Hawke was having none of it.

As per the statement issued by the Australian government, the immigration minister has the power to cancel visas when it is in ‘public interest’.

In his statement, Alex Hawke stated, “Today, I exercised my power under section 133C (3) of the Migration Act to cancel the visa held by Mr Novak Djokovic on health and good order grounds, on the basis that it was in the public interest to do so.”

The statement further read, “This decision followed orders by the Federal Circuit and Family Court on 10 January 2022, quashing a prior cancellation decision on procedural fairness grounds. The Morrison Government is firmly committed to protecting Australia’s borders, particularly in relation to the COVID-19 pandemic.”

Furthermore, in the statement, it was also mentioned that following an adverse decision under section 133C (3), the affected person would not be able to be granted a visa for a period of three years, except in certain circumstances.

This means that Djokovic, defending champion of the Australian Open has been handed a massive setback just three days ahead of the event. Furthermore, as per the statement from Alex Hawke, the 34-year-old Serbian could also be handed a further reprieve as his visa could be cancelled for the next three years.

It remains to be seen how Djokovic reacts to the latest developments and what his next action could be. For now, though, chances of him participating in the Australian Open appear slim.