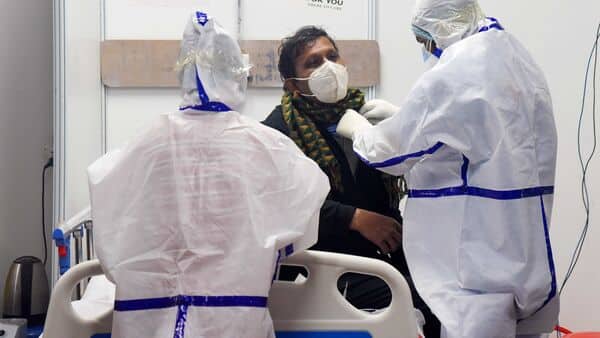 Hospitalisation due to the virus has remained relatively low in the city, and Health Minister Satyendar Jain has said that the plateauing of hospital admissions indicates that the ongoing wave has peaked and cases may go down soon.

However, according to noted epidemiologist, Dr Chandrakant Lahariya, it cannot be concluded that the peak is over solely on the basis of hospital admission data.

The reason being that people get admitted to hospital only some days after they have developed the disease, Lahariya said. “So, there is a lag of 6-7 days.”

“The number of daily cases and the positivity rate should be used to determine the peak. Hospitalisation depends on the criteria adopted for admission (in a particular region). Of course, hospitalisation is an important parameter for public health planning purposes, but not for describing a peak,” he aded.

Director of the National Institute for Implementation Research on Non-Communicable Diseases, Jodhpur, Dr Arun Sharma said, “Epidemiologically, the peak of a wave is determined with the help of the rate of transmission, the number of infected people and the uninfected susceptible population. It can be plotted on a graph but the ground reality is always different from epidemiological modelling.”

The positivity rate is the most important factor because the number of cases may increase or decrease depending on the number of tests conducted, he said.

“Only when the test positivity rate start declining, we would know we have passed the peak,” Dr Sharma said.

“In case of Omicron, most cases are mild and do not require hospitalisation. So, the wave has peaked or not cannot be determined looking at hospital admissions,” he added.

Jain had said on Wednesday the plateauing of hospital admissions over the four days before that indicates the ongoing wave has peaked and cases may go down soon.

Dr Rajeev Jayadevan, vice chairman of the research cell of Kerala’s unit of Indian Medical Association, said the number of hospital admissions is the best indicator of the severity of the ongoing wave of the pandemic, but it is difficult to say whether the wave has peaked or not.

“In 2020, testing was being done with an intention to find a case and isolate them. Now, it is not possible. Everybody is turning out to be positive. How many are we going to chase down the road?” he said.

He said such an exercise takes away manpower from more urgent needs.

“So, ultimately what matters is how saturated are hospital beds in a region, and also whether there is enough manpower to make healthcare delivery possible. In hindsight, the number of hospital admissions and their outcomes will be the best indicator of how severe this wave was.”

“The test positivity rate (TPR) depends on the willingness of people coming forward for testing, availability of testing (resources), who gets tested, and the number of test results that are reported into a central database. TPR in the same area could be followed for trends, but it cannot be compared between regions. So, TPR cannot be relied upon as a sole parameter to decide strategies,” he said.

Meanwhile, Delhi on Thursday witnessed 28,867 new coronavirus cases, the sharpest single-day spike since the beginning of the pandemic, and 31 deaths, while the positivity rate surged to 29.21%.

The capital’s previous biggest daily jump of 28,395 cases was recorded on April 20 last year, according to health department data.

Of the 164 Covid-19 deaths recorded in the first 13 days of January, most patients had comorbidities, as per the government data.