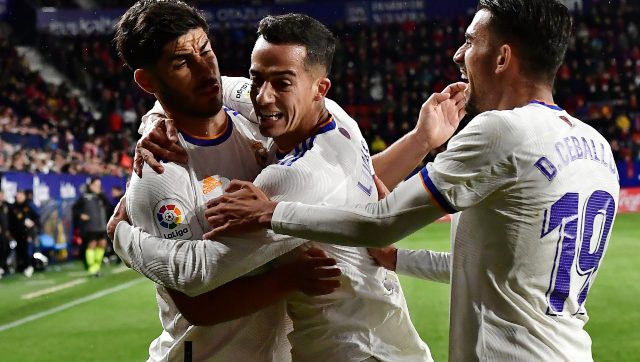 With the Champions League spot at stake, Real Madrid manager Carlo Ancelloti is likely to rest key players including in-form Karim Benzema and Vinicius Junior as they host Espanyol for La Liga title.

Madrid: Real Madrid will win La Liga at the Santiago Bernabeu on Saturday if they avoid defeat against Espanyol as Carlo Ancelotti’s side look to secure the Spanish title before facing Manchester City in the Champions League next week.

Madrid sit 15 points clear of Barcelona and Sevilla in La Liga, meaning they need just one more point from their remaining five league games to be crowned champions for the 35th time.

Given they have been top since November, there will be no surprise about Madrid clinching a league they have dominated for months, but dips in form from Barcelona and Sevilla have offered the chance for an earlier confirmation than expected.

Sealing La Liga could also give Madrid a welcome boost ahead of the second leg of their semi-final against City on Wednesday, when they will need to retrieve a 4-3 loss from the opening game in Manchester last week to advance to another European final.

“The trophy is so close,” Ancelotti said in a press conference on Friday. “The players only talk about tomorrow’s game since the end of the City match. We have a match point and when the best tennis players have a match point, they win it.”

The likelihood is Ancelotti will rotate his starting team against Espanyol, keeping the return leg against Manchester City in mind.

Karim Benzema, Luka Modric and Vinicius Junior could be among those given a rest while some changes will also be forced, with David Alaba struggling with an injury as Eder Militao and Nacho Fernandez are both suspended.

“We have some defensive problems,” Ancelotti said. “I will have to pick Jesus Vallejo, who has not played very much but who has always been a complete professional, and another central defender, which could be Casemiro.”

Should Real lose to 13th-placed Espanyol, they could still seal the title if both Sevilla and Barcelona fail to win, with Sevilla playing Cadiz at home on Friday before Barca host Mallorca on Sunday night.

That scenario seems particularly unlikely but Barca have tailed off in recent weeks, their loss at home to Rayo Vallecano last weekend making it three consecutive defeats at the Camp Nou.

“We deserved more but we didn’t show the personality we needed to show,” said Barcelona coach Xavi Hernandez after that game.

“We’re in a difficult situation. We’re still in the race for the top four but we’ve made it hard for ourselves. We have to keep fighting.”

Barca should still have enough to qualify for next season’s Champions League as they have a six-point advantage over Copa del Rey winners Real Betis in fifth.

But second place is very much up for grabs, with Sevilla level with Barca on points while Atletico Madrid, in fourth, are only two points behind. Atletico play away at Athletic Bilbao on Saturday.

“There are five games left, it will be very hard and whichever team has more energy will take the prize of playing in the Champions League,” said Atletico coach Diego Simeone last weekend.

Betis will look to keep their hopes of finishing in the top four alive by overcoming Getafe on Monday night.

Manuel Pellegrini’s team will have to refocus after they won the club’s first trophy since 2005 on Saturday by beating Valencia in the final of the Copa del Rey.

Villarreal, who lost 2-0 to Liverpool in the first leg of their Champions League semi-final at Anfield in midweek, travel to Alaves on Saturday, three days before the return leg at La Ceramica.

Real Sociedad, in sixth, play away at Rayo Vallecano on Sunday.